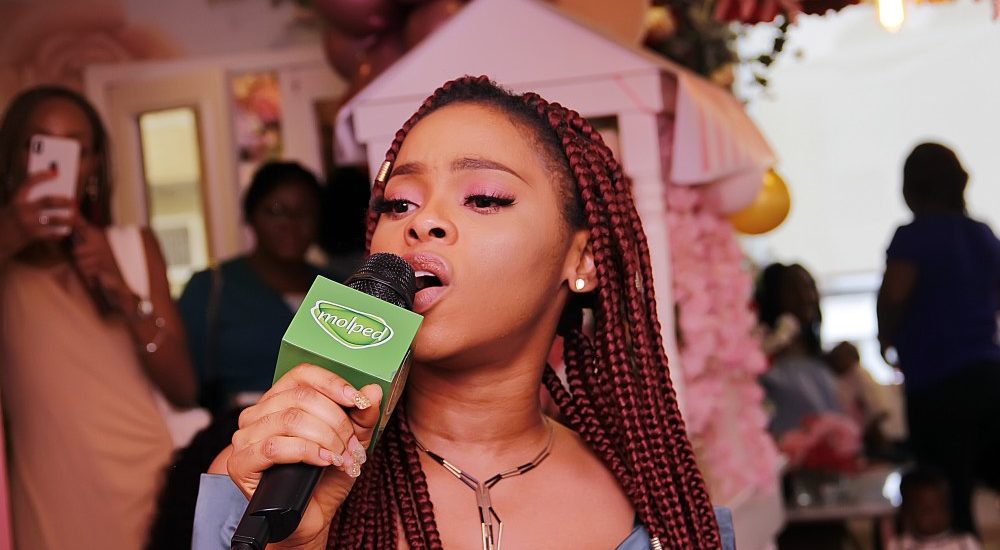 The 28 year old Ekile popularly known by her stage name Chidinma, is a Nigerian singer and songwriter, who in 2010, rose to stardom after winning the third season of Project Fame West Africa

Following the release of the music video for her “Emi Ni Baller” single, she became the first female musician to peak at number one on the MTV Base Official Naija Top 10 chart in 2011.

The ‘Mo Girls’ Hangout which took place inside the cozy ambience of the Tea Room in Lekki- Lagos also had in attendance, Health Care Specialists who addressed the ‘girls’ on key issues about life and living.

The idea is to have a group of girls who will have each other’s backs and basically driving the ideals of friendship.

Also speaking at the occasion, a general health specialist, Dr Doyin Olaosibikan highlighted the health benefits of the sanitary pads mostly especially in the area of absorbing flow during lady period no matter how heavy it is.

According to her, since the MOLPED pad is made with hundred percent cotton, it is breathable which allow air to circulate to the affected areas there by preventing bacteria from being harmful to the users.

Recently, Molped started its digital pages across the social media to reinforce its unique selling points as well as its brand personality. The brand personality is coiled around ‘Best Friends’ and aimed at growing a community of ladies online called  Mo’girls who will drive the best friend narrative.

The MOLPED, according to Onyinyechi Nwosu, Molped’s Brand Manager (Sanitary Pad Category) offers every lady the solution to irritation and roughness, because the range is produced with Nylon free materials and has a breathable back sheet, thus eliminating the burning sensation while in use and additionally providing comforting cottony feel.

According to her, companion and friendship are the two key words that best describe MOLPED with its audience which are lady’s as all the attributes of a true friend   is personified by the brand

In her words: “the launch of this hangout today is the focal point and the beginning for the brand and the lady’s to synergies to form that much needed bond which is friendship and companion which is the connecting point.”

MOLPED Sanitary Pads was launched into the Nigerian market in April 2019, changing the narrative of the feminine care category in Nigeria.

Since then, it has enjoyed growing presence in Traditional & Modern Trade channels. To further hasten this, the brand deployed a team of all girls “MOLPED Auxiliary squad” aimed at educating retailers on brands USP while leaving samples behind for the retailers to share the shoppers.

The World Friendship day is a day to celebrate the beautiful bond of friendship that not necessarily be connected by blood, but is so precious.

The first World Friendship Day was proposed for 30 July 1958 by the World Friendship Crusade, an international civil organization that campaigns to foster a culture of peace through friendship In 2011, the 30th July was declared as the International Day of Friendship by the General Assembly of United Nations.